Wheezer Lockinger played the local Rockford scene during the late 60’s and later in a second incarnation in the 80’s. They performed with recording groups including Paul Butterfield, The Grateful Dead, Fleetwood Mac and R.E.O. Speed wagon. Perhaps one of the most memorable performances was when Wheezer Lockinger opened for Fleetwood Mac with Peter Green at the Rumpus Room in Belvidere. They also were frequent performers at the original Charlotte’s Web. 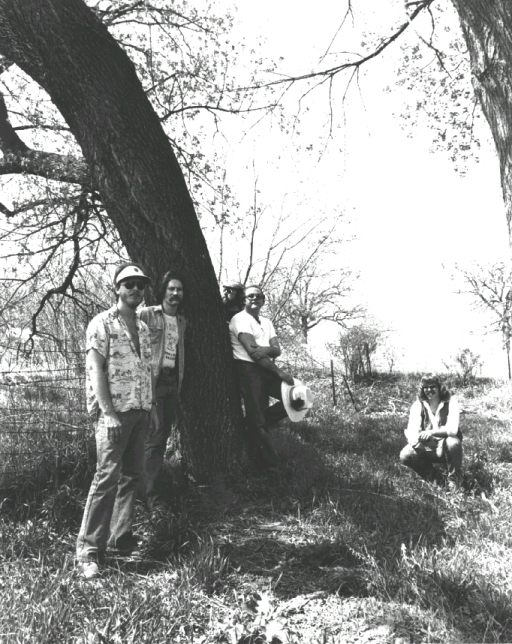 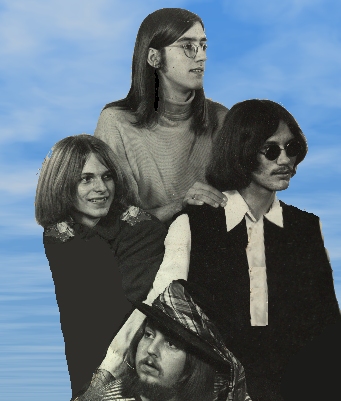 There were many different versions of the group and I'll be adding pictures of the other members as I get them in. The picture to the left is one of the earliest with Ron Wylie left, Bruce Farnam top, Dave middle, Thomas bottom and Roger Wylie right. Here's one of Dale Brown , Colonel, Jim Wells and Roger: 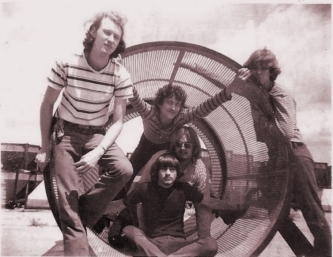 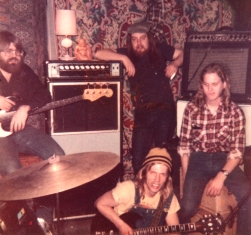 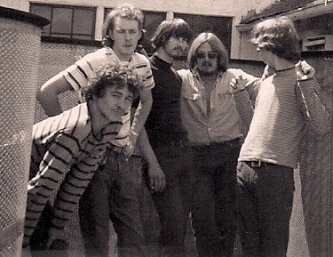 Here's our last promo text and song list as we ended out our run just short of the mark:

"This concert group has performed with recording groups including Paul Butterfield, The Grateful Dead, Fleetwood Mac and R.E.O. Speedwagon. The group draws it's formidable rock strength from thousands of road miles and stage hours that has honed the style of the group and allows it to achieve what few groups have yet to achieve, adding new dimensions to rock without compromising its raw power and melody. Wheezer Lockinger is currently touring the Midwest area. As they go from studio to stage, they bring with them energy, power and modern texture.

Tom Leary is one of the keyboard players and vocalists in the group. Through the years his original songs have established a distinctive style and drive that contributes to the Wheezer Lockinger sound. Demanding the ultimate from his synthesizer and electric organ, he weaves a web of textures with his keyboard counterpoint to blend with the rough, raw power created by the guitars, drums and additional keyboards.

Coming directly from the rock group Daggers, Dean Reynolds brings with him his own rock, vocal, bass guitar and songwriting style perfected during his many years on the road in the Midwest area. Dean is a motivating force in the group and has contributed several originals to the band's repertoire.

Roger Wylie on drums and vocals, also contributes words and music to several Wheezer Lockinger songs. After a short stint in Rick Nielsen's rock n' roll band, (the predecessor of Cheap Trick) featuring Stewkey of Nazz, he continued working on the road developing a vocal style that is one of the more important trademarks of the group. His rock drumming is the methodical thunder that powers the band and gives it that never faltering drive that is indispensable to rock music.

On guitar the group has what is felt by group and audiences alike as their strongest asset. David Lee, or Colonel as he is known, is looked up to by many concert goers in the Midwest as one of the best rock guitarists.

Dave Hanson, as well as being an extraordinary multi-keyboardist covering string symphonizer, synthesizer and electric piano, is at home on stage as much with his blues harp and vocals as he is with the keyboards. He has encompassed blues and rock in his previous groups and is contributing words and music to Wheezer Lockinger originals"

I was sent a picture of some old Rumpus Room posters taken by Brad Sevedge now living in Milwaukee, Wisconsin. He found them up in his attic. They included the one advertizing Fleetwood Mac for the job we backed them up on Tuesday Dec 23: 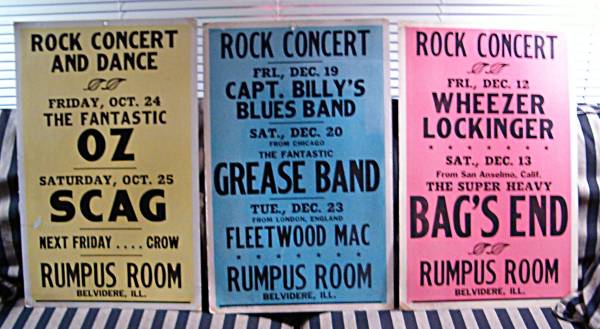