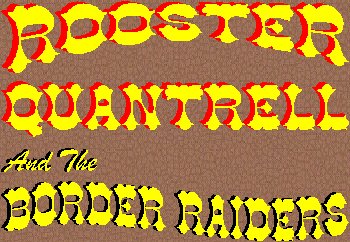 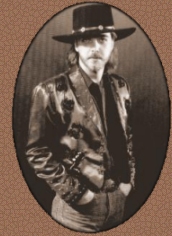 I had seen the name Rooster Quantrell quite a bit on the European charts and the name really stuck in my mind. When I finally had a chance to hear some of his music and do some research I stumbled onto a story that was as interesting as the music. Rooster Quantrell is a character invented by a Colonel Buster Doss. Rooster is a real person now, but only because the Colonel brought him to life by discovering and coaching his candidate to play the role he had envisioned in 1980. The Colonel's story is a very interesting one. 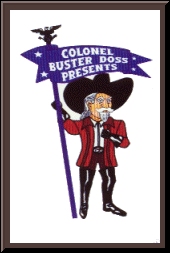 These are just some of the Highlights of a career in Show Business spanning over a half century." The Colonel says, "If you can find anyone in the Music Business who can even come close to this Track Record - I'll show you a tree that a bird has never lit in!" You can visit the Colonel at:

In 1980 The Colonel began to develop the "Rooster Quantrell" idea. He called a life long amigo of his, Max Harrison (who drew the Gene Autry & "Smiley" Burnette comic books) to draw up the logo for "Rooster Quantrell". But the right person had to be found to portray "Rooster"! It was a long search! This person not only had to have a great voice but would have to be a top-shelf musician to meet the standards the Colonel wanted and had set for "Rooster Quantrell". The Colonel has owned Country Music Theaters (The Frontier Jamborees) from Missouri to Texas, and it was on one of his Jamborees in Ashdown, Arkansas that he found "Rooster". A young man who plays trumpet, piano, guitar, bass, Etc. The Colonel began to develop his musical style. A lot of rainy nights and long days went into this project before "Rooster" began to emerge."

Mule Dog Records names this the CD of the year! Never has there been a finer example of western swing than in this fantastic collection of material. Rooster's voice has that real Cowboy sound of Gene Autrey, Roy Rogers and Willie Nelson but also has the richness of a Bing Crosby. The Colonel assembled some of the finest musicians to record this gem and it really does shine!

"With musicians like the great Buddy Emmons on Steel Guitar, Larry Franklin from The Cooder Browne Band and Asleep At The Wheel and who has recently done the albums of such great stars as Mark Chesnutt, Alan Jackson, Shania Twain, Reba McEntire, on Fiddle, Plus Bass Player Mike Chapman who did most of Garth Brooks's albums and many other great session pickers who grew up on Western Swing. It is easy to see why this is such a great CD!!!"

Our favorite song is "Rose Of San Antone" and we'll be singing that one around the Mule Dog campfire for many years to come. This is a real tribute to the lifetime of work the Colonel has invested in the music industry, since he is not only responsible for the vision that brought this together but also is the author of all the wonderful songs contained on the CD. Our hats are off to the Colonel, Rooster and all the musicians that made this our pick for CD of the year 2000!

You can hear some of the cuts from this CD on MP3 for free at MP3.COM